First, let's develop some intuition about the protocol. Imagine a room full of people trying to agree on what to get for lunch. Suppose it's a binary choice between pizza and barbecue. Some people might initially prefer pizza while others initially prefer barbecue. Ultimately, though, everyone's goal is to achieve consensus.

Everyone asks a random subset of the people in the room what their lunch preference is. If more than half say pizza, the person thinks, "Ok, looks like things are leaning toward pizza. I prefer pizza now." That is, they adopt the preference of the majority. Similarly, if a majority say barbecue, the person adopts barbecue as their preference.

Everyone repeats this process. Each round, more and more people have the same preference. This is because the more people that prefer an option, the more likely someone is to receive a majority reply and adopt that option as their preference. After enough rounds, they reach consensus and decide on one option, which everyone prefers.

The intuition above outlines the Snowball Algorithm, which is a building block of Avalanche consensus. Let's review the Snowball algorithm.

Everyone repeats this until they get a quorum for the same response β times in a row. If one person decides pizza, then every other person following the protocol will eventually also decide on pizza.

For a great visualization, check out this demo from Ava Labs' Co-Founder Ted Yin.

In our example, there is a binary choice between pizza or barbecue, but Snowball can be adapted to achieve consensus on decisions with many possible choices.

These values, which are constants, are quite small on the Avalanche Network. The sample size, k, is 20. So when a node asks a group of nodes their opinion, it only queries 20 nodes out of the whole network. The quorum size, α, is 14. So if 14 or more nodes give the same response, that response is adopted as the querying node's preference. The decision threshold, β, is 20. A node decides on choice after receiving 20 consecutive quorum (α majority) responses.

Now let's introduce a data structure called a DAG or Directed Acyclic Graph. A DAG gives a partial ordering of decisions. For example, check out the DAG in this diagram: 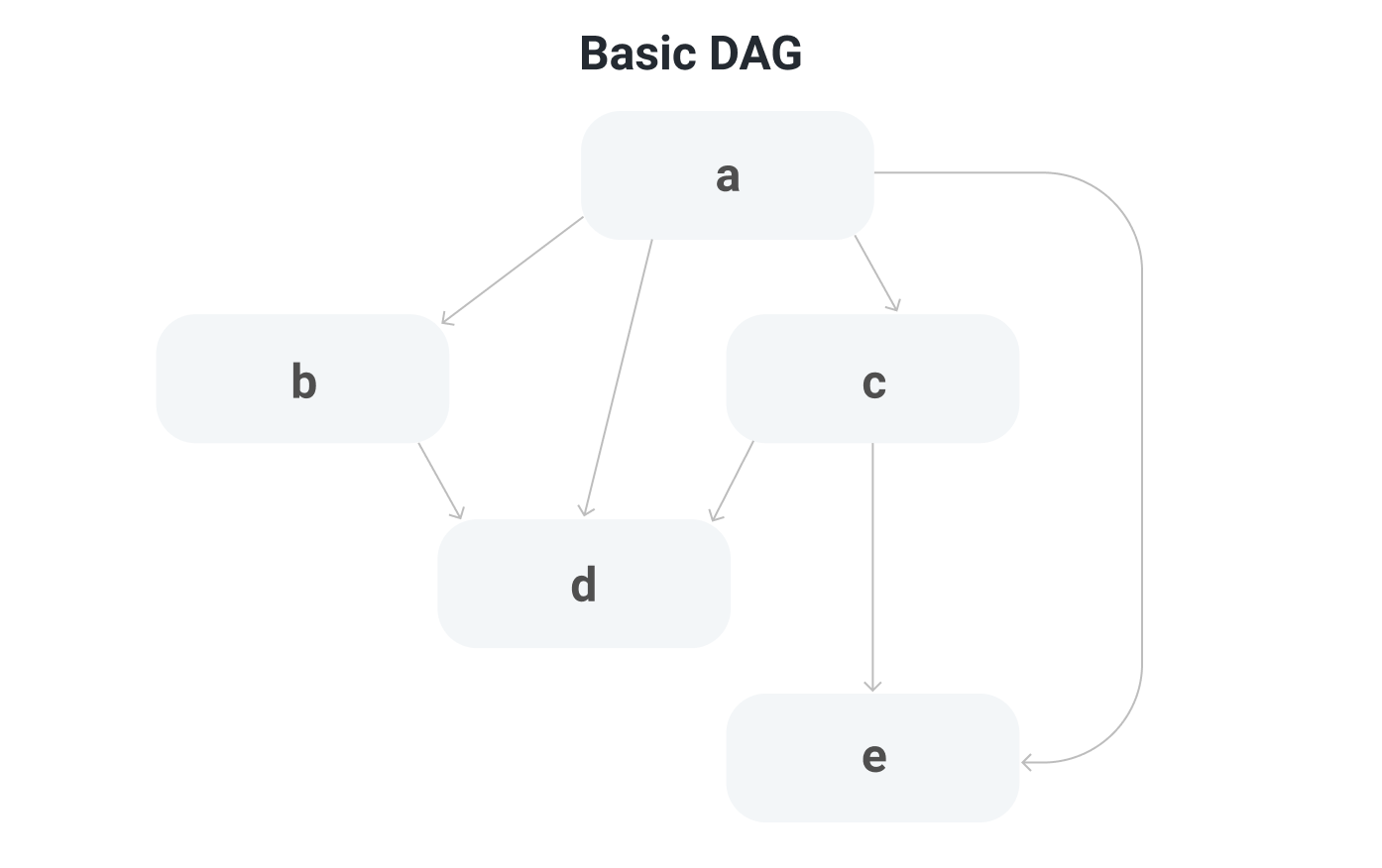 a is before b. b is before d. c is before e. Transitively, we can say that a comes before e. However, since this is a partial ordering: for some elements, ordering is not defined. For example, both b and c are after a but there is no notion of whether b is before or after c.

Both Bitcoin and Ethereum, for example, have a linear chain where every block has one parent and one child. Avalanche uses a DAG to store data rather than a linear chain. Each element of the DAG may have multiple parents. The parent-child relationship in the DAG does not imply an application-level dependency.

Suppose we have an Avalanche network running with the following parameters. The sample size, k, is 4. The quorum size, α, is 3. The number of consecutive success, β, is 4. 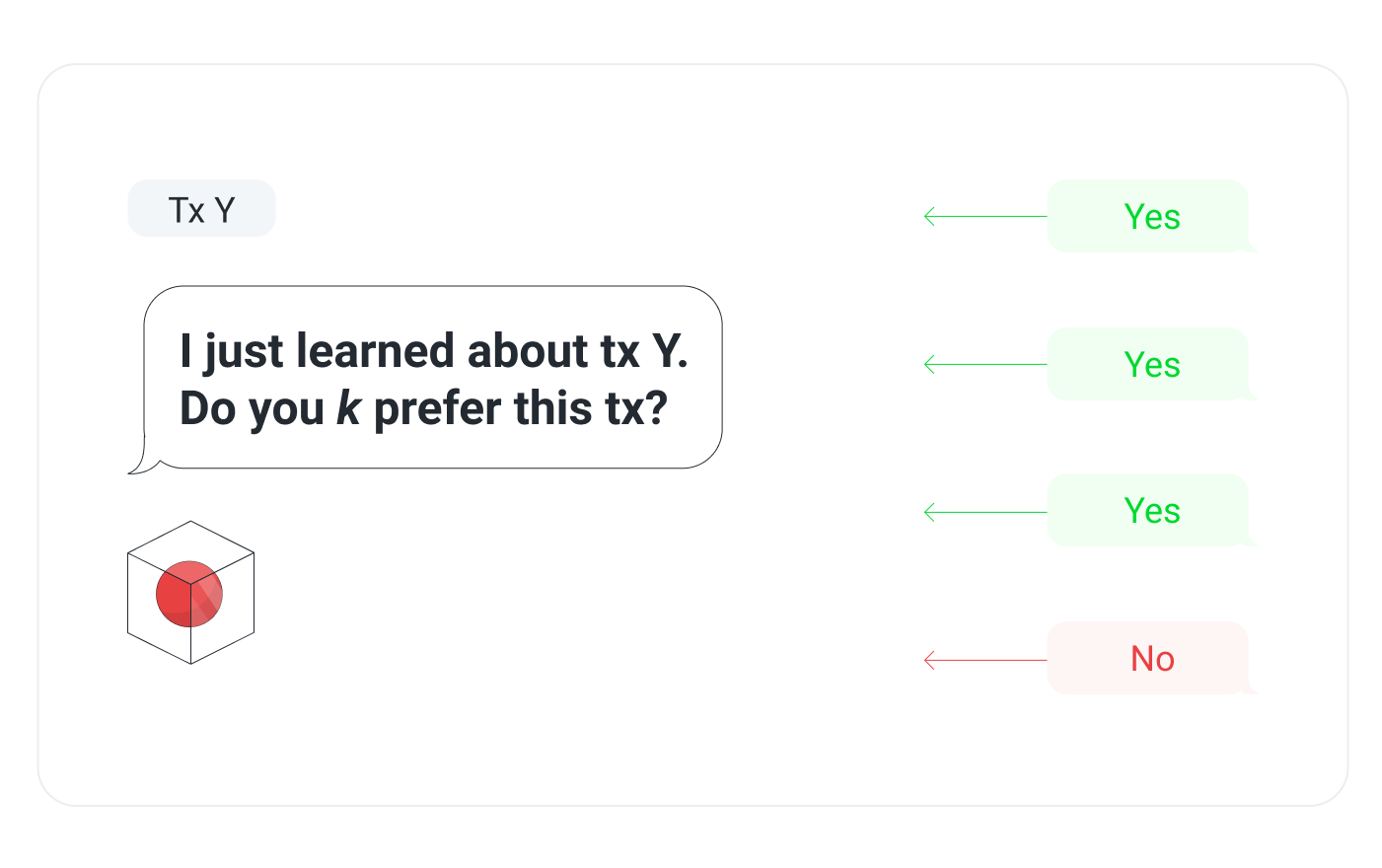 A node finds out about a new transaction Y. It queries the network based on the above parameters. It queries k (4) validators and asks, "Do you prefer this transaction?" It gets back responses—three of them say yes and one of them says no. The quorum size, α, is 3 so there is an α majority (quorum) of yes responses. Now the node updates its DAG. 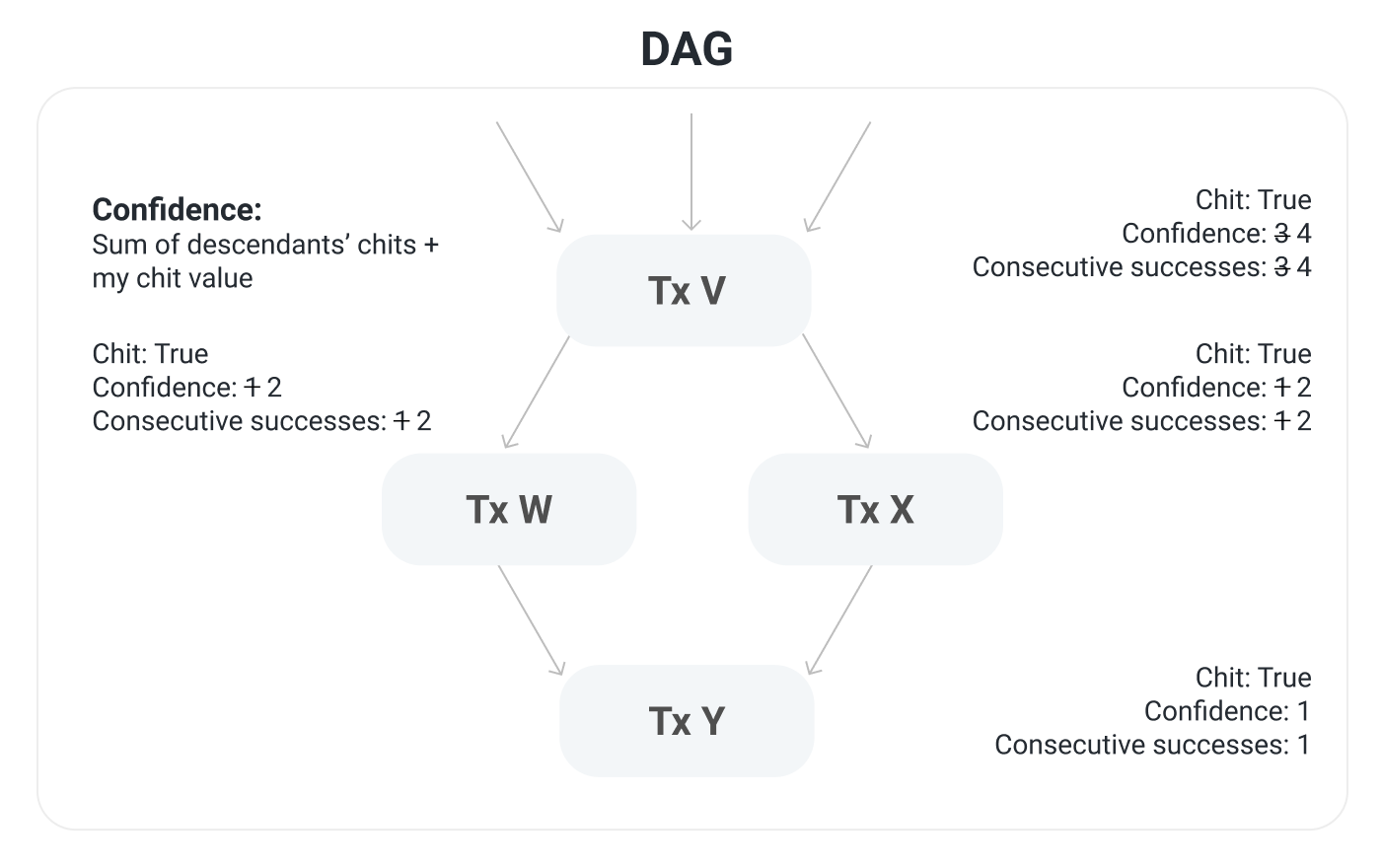 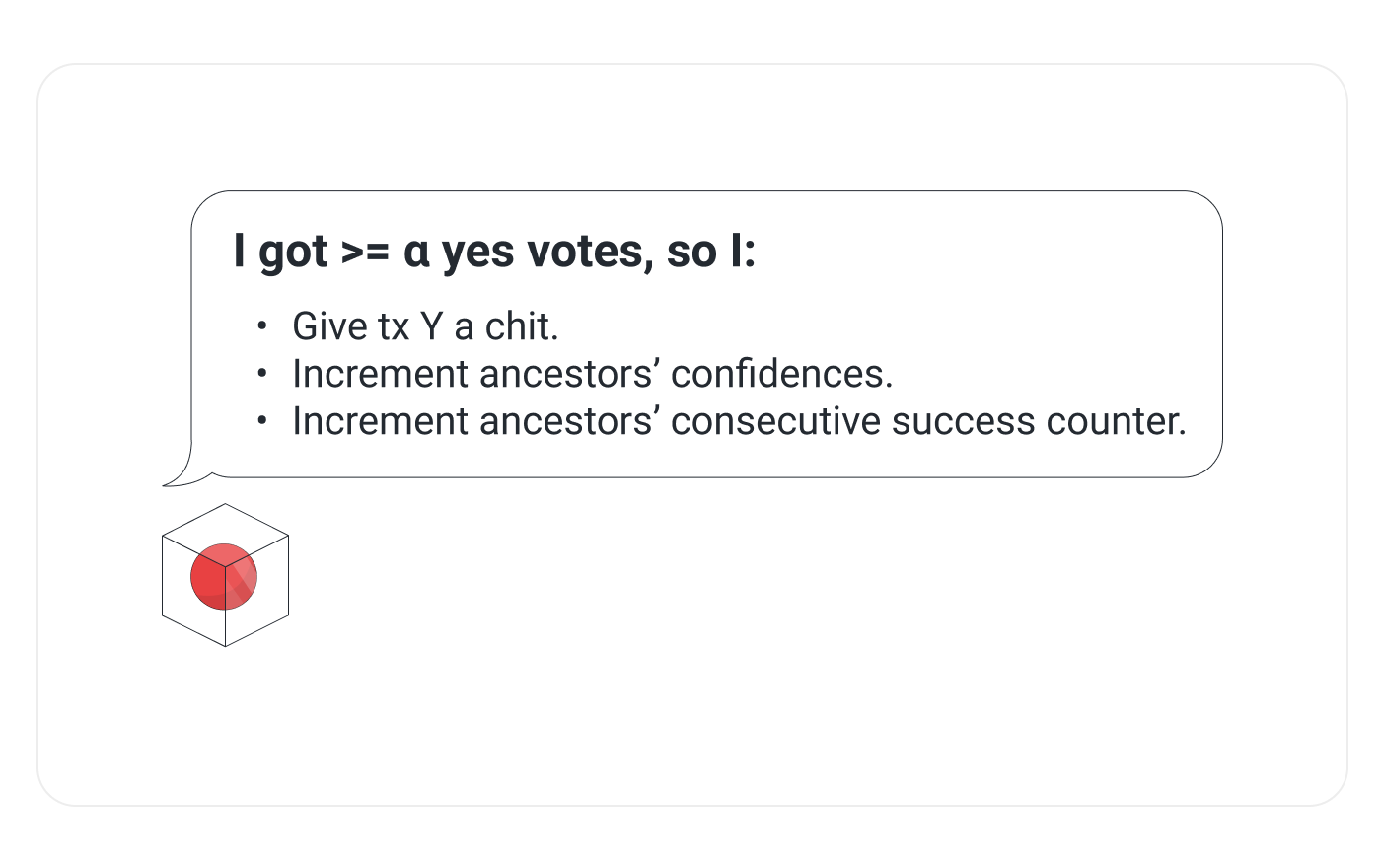 In this example we the acceptance threshold, β, is 4. Transaction V has 4 consecutive success so it's accepted. This node is sure that every other correct node will eventually accept this transaction. 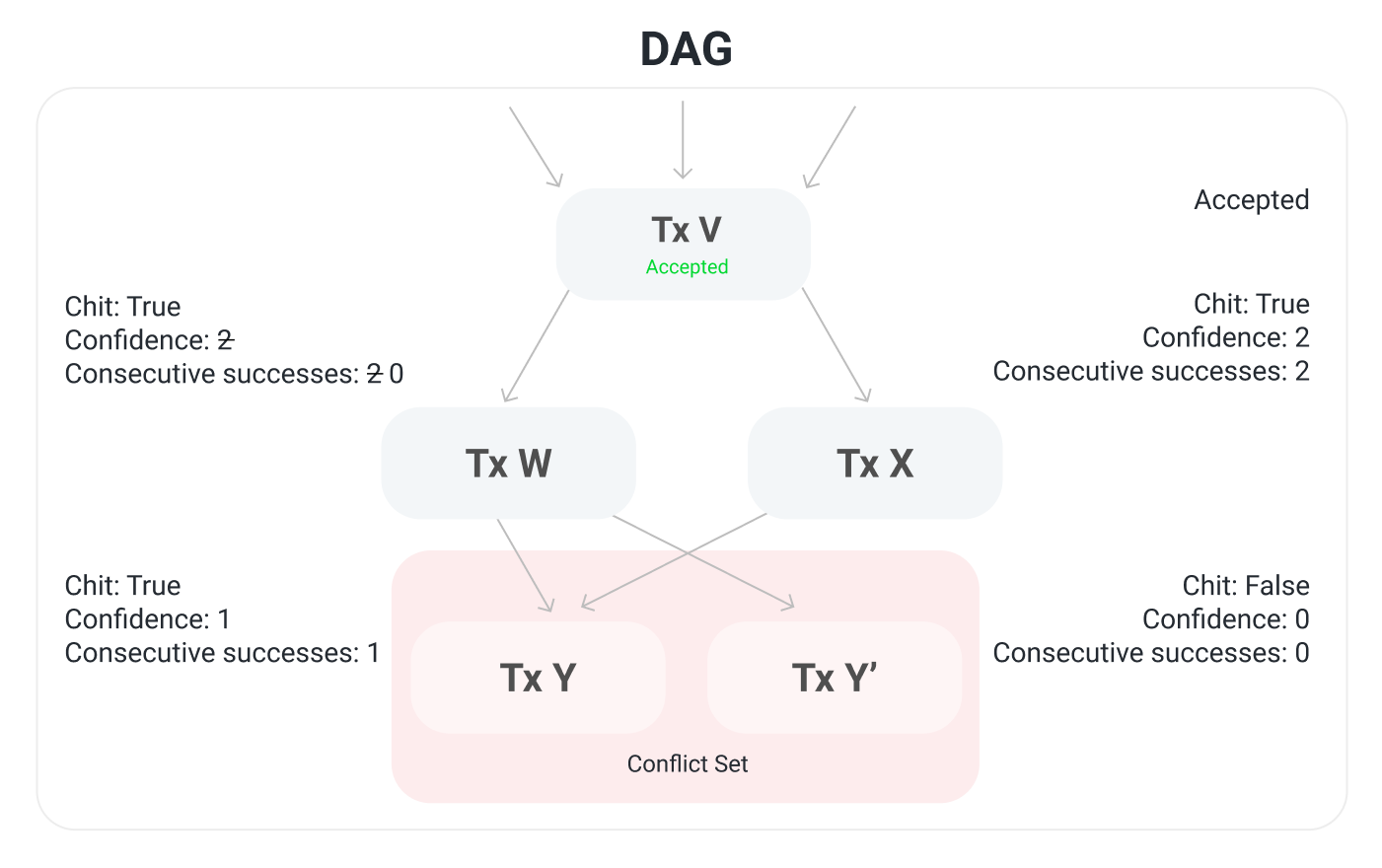 Transactions Y and Y' are in a conflict set; only one of them can ultimately get accepted. Transaction Y' doesn't get a chit because it didn't get an α majority response. It has confidence 0 because it doesn't have a chit and it doesn't have any descendants with a chit. It has 0 consecutive successes because the previous query didn't get an α majority response. Transaction W's consecutive success counter goes from 2 to 0. Its confidence is still 2. 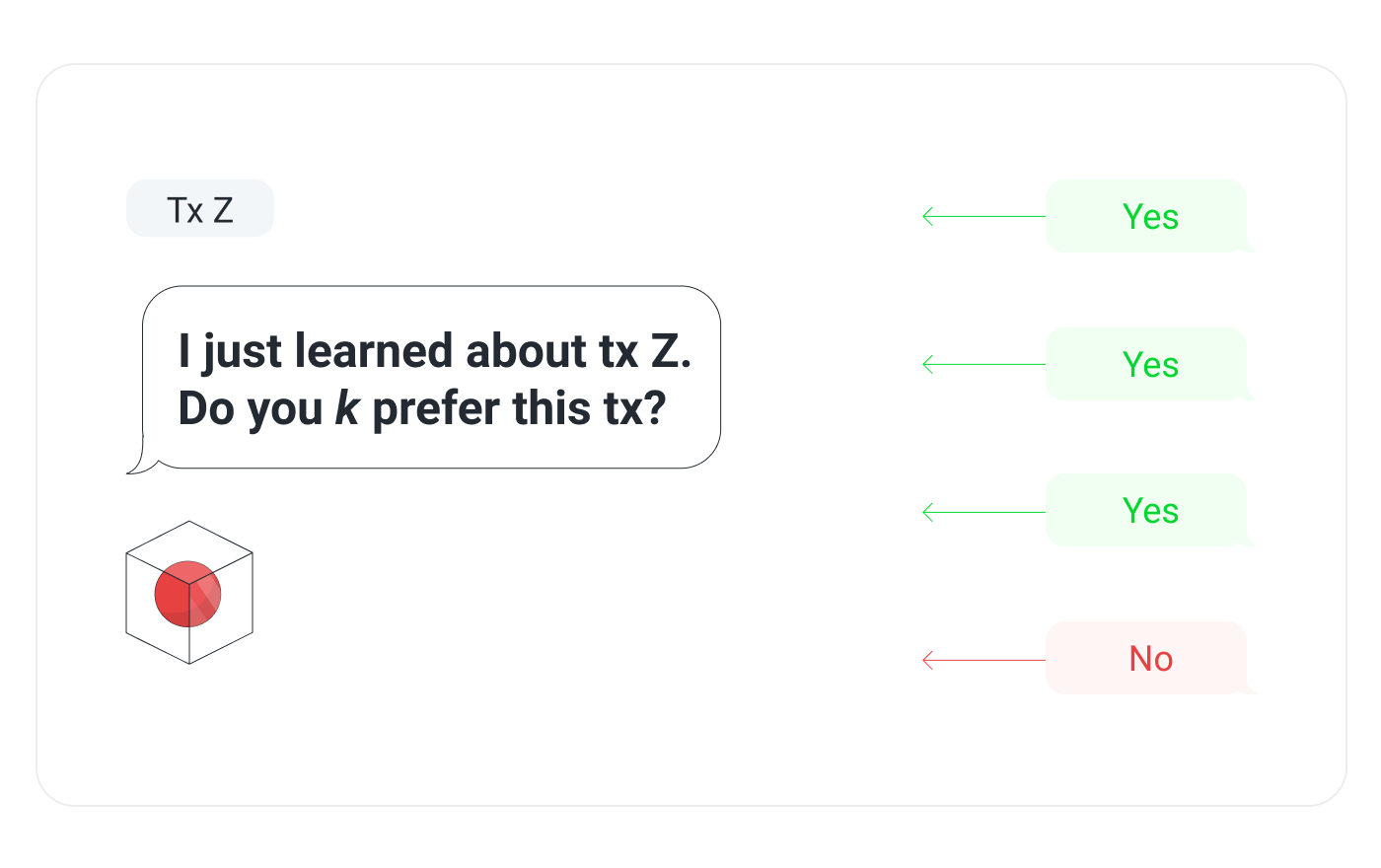 Now the node learns about a new transaction, Z, and it does the same thing as before. It queries k nodes, gets back an α majority response, and updates the DAG.

Everything discussed to this point is how Avalanche is described in the Avalanche whitepaper. The implementation of the Avalanche consensus protocol by Ava Labs (namely in AvalancheGo) has some optimizations for latency and throughput. The most important optimization is the use of vertices. A vertex is like a block in a linear blockchain. It contains the hashes of its parents, and it contains a list of transactions. Vertices allow transactions to be batched and voted on in groups rather than one by one. The DAG is composed of vertices, and the protocol works very similar to how it's described above.

Avalanche consensus is probabilistically safe up to a safety threshold. That is, the probability that a correct node accepts a transaction that another correct node rejects can be made arbitrarily low by adjusting system parameters. In Nakamoto consensus protocol (as used in Bitcoin and Ethereum, for example), a block may be included in the chain but then be removed and not end up in the canonical chain. This means waiting an hour for transaction settlement. In Avalanche, acceptance/rejection are final and irreversible and take a few seconds.

It's not efficient for nodes to just ask, "Do you prefer this vertex?" when they query validators. In Ava Labs' implementation, during a query a node asks, "Given that this vertex exists, which vertices do you prefer?" Instead of getting back a binary yes/no, the node receives the other node's preferred vertex set.

Nodes don't only query upon hearing of a new transaction. They repeatedly query until there are no virtuous vertices processing. A virtuous vertex is one that has no conflicts.

Nodes don't need to wait until they get all k query responses before registering the outcome of a poll. If no transaction can get an α majority then there's no need to wait for the rest of the responses.

If it were free to become a validator on the Avalanche network, that would be problematic because a malicious actor could start many, many nodes which would get queried very frequently. The malicious actor could make the node act badly and cause a safety or liveness failure. The validators, the nodes which are queried as part of consensus, have influence over the network. They have to pay for that influence with real-world value in order to prevent this kind of ballot stuffing. This idea of using real-world value to buy influence over the network is called Proof of Stake.

To become a validator, a node must bond (stake) something valuable (METAL). The more METAL a node bonds, the more often that node is queried by other nodes. When a node samples the network it's not uniformly random. Rather, it's weighted by stake amount. Nodes are incentivized to be validators because they get a reward if, while they validate, they're sufficiently correct and responsive.

Avalanche doesn't have slashing. If a node doesn't behave well while validating, such as giving incorrect responses or perhaps not responding at all, its stake is still returned in whole, but with no reward. As long as a sufficient portion of the bonded METAL is held by correct nodes, then the network is safe, and is live for virtuous transactions.

Two big ideas in Avalanche are subsampling and transitive voting. Subsampling has low message overhead. It doesn't matter if there are twenty validators or two thousand validators; the number of consensus messages a node sends during a query remains constant. 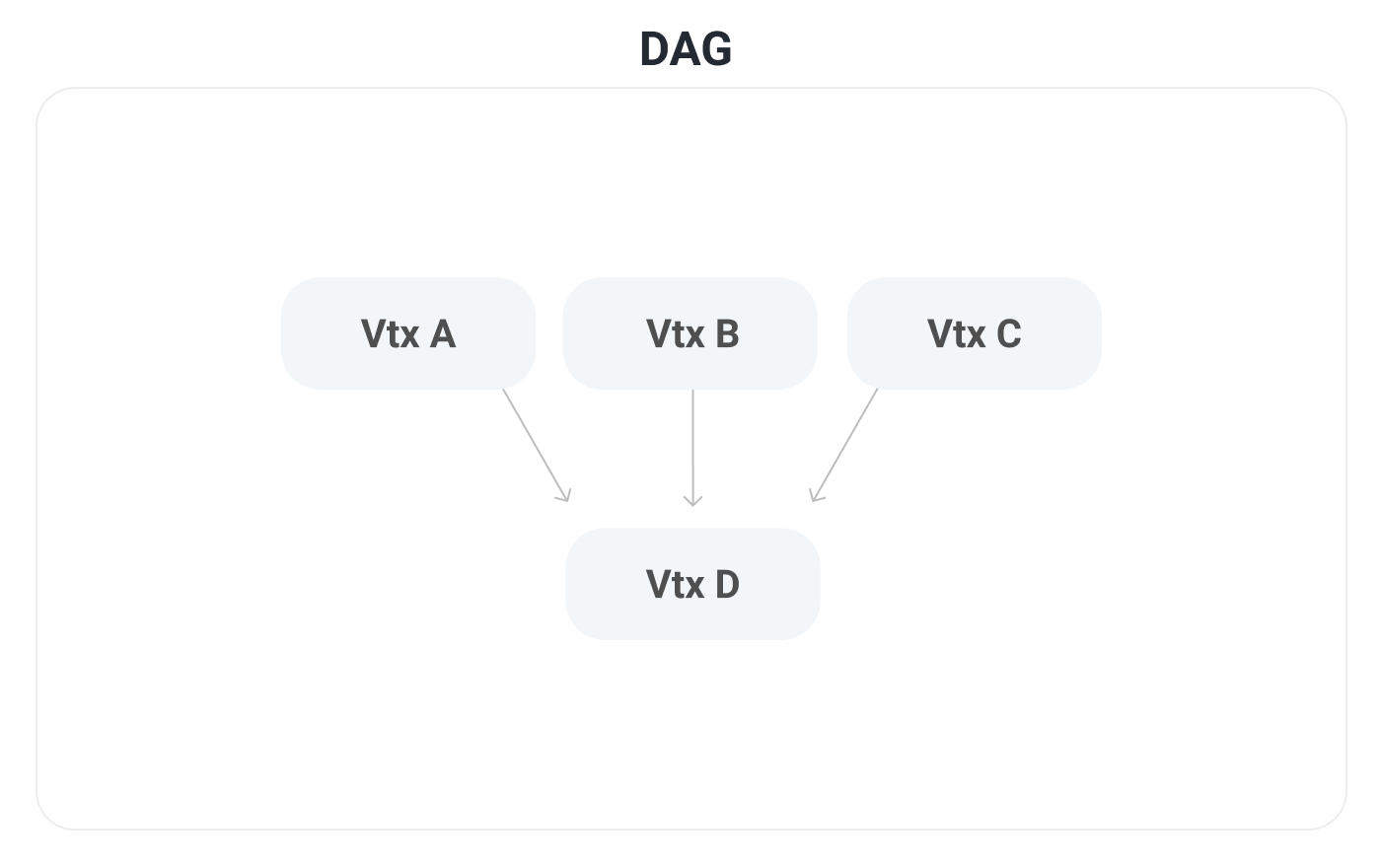 Transactions are created by users which call an API on the MetalGo full node or create them using a library such as MetalJS. Vertices are created when nodes batch incoming transactions together or when accepted transactions from a rejected vertex get reissued and added to the DAG. A vertex's parents are chosen from the virtuous frontier, which are the nodes at the tip of the DAG with no conflicts. It's important to build on virtuous vertices because if we built on non-virtuous vertices there would be a higher chance that the node would get rejected which means there's a higher chance it's ancestors get rejected and we would make less progress.

Avalanche works for linear chains too. The protocol is largely the same as above, but each vertex has only one parent. This gives a total ordering of vertices. This is useful for certain applications where one needs to know if a transaction came before another transaction, such as with smart contracts. Snowman is the name of Ava Labs' implementation of the Avalanche consensus protocol for linear chains.

If there are no undecided transactions, the Avalanche consensus protocol quiesces. That is, it does nothing if there is no work to be done. Avalanche is more sustainable than Proof-of-work where nodes need to constantly do work.

Avalanche has no leader. Any node can propose a transaction and any node that has staked METAL can vote on every transaction, which makes the network more robust and decentralized.

Avalanche is a general consensus engine. It doesn't matter what type of application is put on top of it. The protocol allows the decoupling of the application layer from the consensus layer. If you're building a Dapp on Avalanche then you just need to define a few things, like how conflicts are defined and what is in a transaction. You don't need to worry about how nodes come to an agreement. The consensus protocol is a black box that put something into it and it comes back as accepted or rejected.

Avalanche can be used for all kinds of applications, not just P2P payment networks. Avalanche's Primary Network has an instance of the Ethereum Virtual Machine, which is backward compatible with existing Ethereum Dapps and dev tooling. The Ethereum consensus protocol has been replaced with Avalanche consensus to enable lower block latency and higher throughput.

Avalanche is very performant. It can process thousands of transactions per second with one to two second acceptance latency.

Avalanche consensus is a radical breakthrough in distributed systems. It represents as large a leap forward as the classical and Nakamoto consensus protocols that came before it. Now that you have a better understanding of how it works, check out other documentations for building game-changing Dapps and financial instruments on Avalanche.